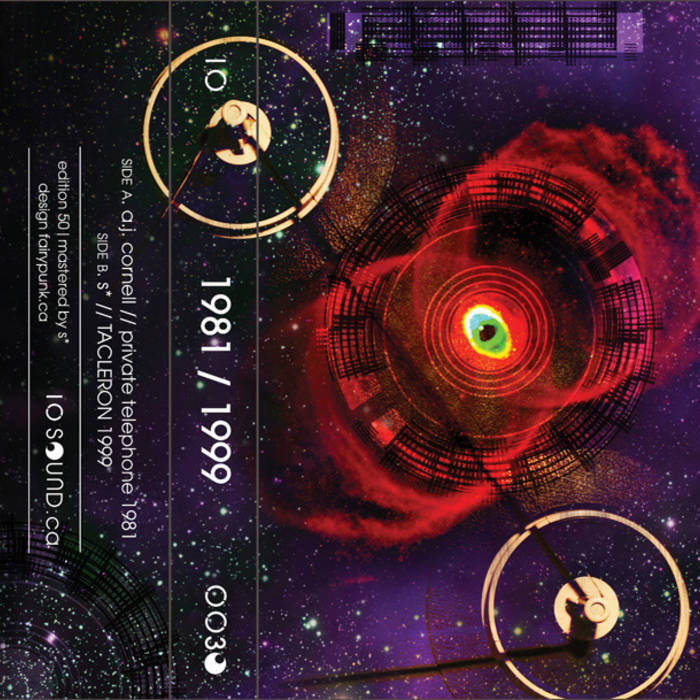 IO/003 ––– features a split collaboration of found sounds and wiretaps between s* and a.j. cornell, a two-part dissection of the overheard and the understated sources of power, from secret affairs to police surveillance. Discovering an old cassette tape in an antique dresser, a.j. cornell unravels the erotic tension between two lovers attempting to keep their politically-explosive affair under control, constructing a strangely seductive soundscape during a live radio-art performance at Montréal’s CKUT 90.3FM. Recovering long lost tapes of the N30 protests (the Battle of Seattle), s* composes a tense montage from the police scanner, combatting surveillance and arrest activities with frequency and noise manipulation. Each side presents a full immersion in overhearing behind-the-scenes banter, providing the craven ear with its own surveillance apparatus, and seducing the listener with the unheard discourses of secrecy and power, personal and public.

Andrea-Jane Cornell ——— is a sound and radio artist and improviser based in Montreal, Canada, who revels in the practice of everyday listening where the sonorities present in any given environment can be likened to an assemblage of musical instruments randomly orchestrated by its inhabitants. She makes haphazard assemblages of sounds using field recordings, metal mixing bowls, hydrophones, railway ties, singing saw, pitch shifter, glass beads, voice and whatever may be lying around; endlessly pursuing the elusive aural sharawadji. She has spent the last 5 years working at Montreal's Radio CKUT 90.3FM where she is the Music Programming Coordinator. She has been known to use the broadcasting studio as a laboratory for boundless solo work and collaborative experimentation. [ andrea-janecornell.com ]